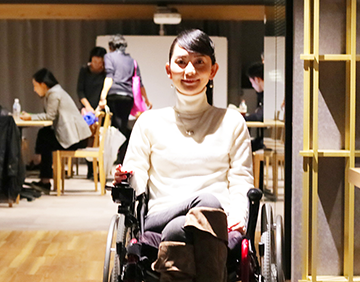 WheeLog! is a barrier-free map application allowing users to create maps. By simply taking photos and "posting the place" using smartphones, information necessary for barrier-free facilities can be shared. Users can post information on 10 items including restrooms, elevators, restaurants, hotels and parking lots. In addition, they can also draw lines on maps by inputting the route for wheelchairs as a "travel log."

For example, there is a slope in a passage of an underground area of Shinjuku. Normally, you would guess that you can go further if there is a slope. But when you actually go further, there are only escalators and stairs and wheelchair users come to a dead end. On WheeLog!, such information can also be posted, so in the future, it would be possible to avoid situations where wheelchair users cannot actually move forward although they thought they could, or, adversely, they hesitate about going due to uncertainty although they actually can. In addition, users can also consider their route by referring to the "travel log."

In addition, WheeLog! is not just a barrier-free map but is also provided with a communication function. For example, it has the function to "tweet" messages such as, "it is difficult to travel in the underground area of Ikebukuro by wheelchair" or "waiting for information on hidden elevators." This kind of communication between non-handicapped people and wheelchair users is also uplifting. In order to develop "mental barrier free," we are expecting to further activate its use.

We believe that some administrative agencies have published maps in the past. Tell us the difference between WheeLog! and such maps.

It is true that some information has been published in the past. Yet, there were problems such that individual search was troublesome, the information was not updated and was old with low credibility or information could not be obtained unless the user went to the actual site. In addition, I believe administrative agencies have difficulties publishing uncertain or subjective information. But from the viewpoint of wheelchair users including me, users' subjective information is sufficiently useful.

Anyone can post on WheeLog! but many users are wheelchair users or their close relatives. On-the-scene information is also another advantage of WheeLog!. Currently, a non-handicapped person living in Taipei is posting the most information.

Why did you develop WheeLog!?

I have a son and I always had the feeling that I would be sad if my son couldn't do something because of my use of a wheelchair. One time, we wanted to go to the sea. Though we didn’t picture the sea as a barrier-free spot, when we made a search, there was actually a sea we could visit in Ibaraki Prefecture!

When we went on safari in Kenya two years ago, I refrained from drinking water from the day before we arrived to avoid any trouble in case there were no restrooms available for wheelchair users. But when we actually went there, there was a restroom. We wouldn’t have had to worry so much only if we had had prior information. It turned out well for me as I actually went there, but some people may have given up going due to lack of information.

As I have just described, there are many places where even wheelchair users or handicapped people can go only if they have the necessary information. Based on this fact, I came up with the idea to create a map to realize such situation. Yet, it is of course impossible for me to post barrier-free information on Japan and the world only by myself. Thus, I decided to develop WheeLog!.

We are engaged in activities using WheeLog! because there are insufficiencies. Yet, actually in Japan, more barrier-free environments are being put into place in comparison to other countries. There is less stone pavement, most of the difference in the grade levels of streets can be overcome, and there are many multipurpose restrooms. I believe many people in other countries do not picture Japan like that. I feel that they do not know the actual situation in Japan.

With the Olympic games to be held in 2020, many people from around the world will make searches about Japan. There will also be people requiring barrier-free environments among such people and I wanted to tell them the places they can visit in Japan. Thus, we created an English version of WheeLog!. We would be happy if it is used as a reference for people visiting Japan. We would also like to see it used as a reference in developing countries where serious efforts for barrier-free environments will be made in the future.

We are aiming to create a positive society where wheelchair users can feel encouraged to travel by knowing others' experience instead of hesitating to go because of their use of wheelchairs.