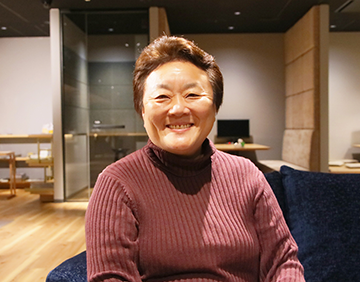 Tell us about the services offered by ZEST.

What kind of companies are using this system?

It would be easier for you to see the whole picture if you imagine manufactures or companies dealing with those requiring maintenance such as medical equipment, gas and electricity. For example, when a client's machine breaks down, if you receive a commission to repair the machine, you have to think of various matters such as the specific model that broke down, the details of the breakdown, the estimated time for repair and the specific person who has the skills to make such a repair. Since there are so many complicated items to consider, these works are managed with difficulty by experienced members of the company using whiteboards.

ShareONE is a system which has enabled these works to be carried out automatically without depending solely on experienced members. 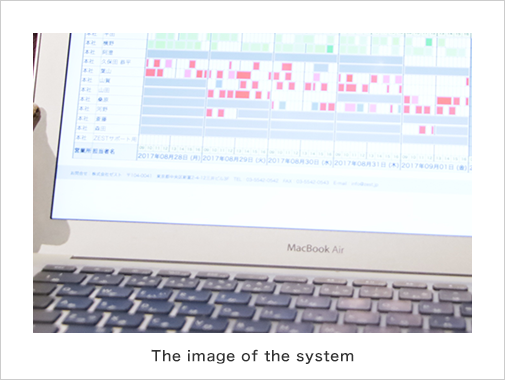 What led to the introduction of the system?

Especially in SMEs, it is not a rare case where there is only one person in the company who can manage this scheduling work. Since this member cannot take a holiday and is under psychological pressure, he/she sometimes retires on short notice due to physical or mental illness.

If such a situation occurs, the company will not be able to manage the scheduling and thus will not be able to respond to business inquiries. Some companies have even suffered a 30% decline in sales due to scheduling. Our product is found by such companies in search of a system with a sense of crisis of being too dependent on individual skills.

Customers are giving extremely good responses since our service can more than double the productivity without depending on individual skills.

This system can also be used in foreign companies. In Japan, many companies are still managing scheduling using whiteboards or paper so some companies are shocked when they hear that everything can be managed by a system straight away. However, in the U.S. or European countries, all works have already been digitized and thus they have no resistance to automatic scheduling. Thus, we will focus on sales in foreign countries in addition to expanding sales in Japan. In the future, we are also expecting to focus on the expansion of our service regarding home-visit nursing and nursing in the U.S., Europe, Asia and Japan as well as development of optimization sharing for other industry or those other than human resources.