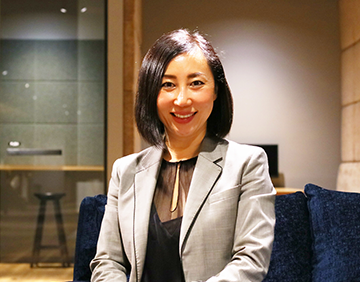 Manufacturing and sale of "Optimus" series, a next-generation photocatalyst paint developed by an industry-government-academia collaboration initiative.

Tell us about Optimus.

Optimus is a range of next-generation paints that use photocatalytic technology, which were developed by our company in partnership with Osaka Prefecture University and Sakai City.

A photocatalyst is a substance that generates powerful free radicals when it absorbs light, while also demonstrating decomposition capabilities and super-hydrophilic properties. Optimus is a product in which photocatalysts have been incorporated into paint.

What kind of effects do photocatalysts have?

The whiteness of Optimus is another selling point. You might have noticed that white external walls usually get dirty really quickly. But Optimus is self-cleaning, which means that it stays white for a long time. Its matte finish is stylish and it’s a paint, so it can be applied to both new and existing buildings. Plus, using the appropriate product from our range of primers means that it can be applied to any surface.

Where is Optimus most commonly used?

It can be used anywhere — at home, in offices, or even in factories — but is most commonly used in places where cleanliness is vital or where odors tend to build up, such as hospitals, dental clinics, hotels, and gyms.

Tell us what triggered its development.

I was born into a family that owns a paint factory. But I wasn’t very interested in the family business, so after I finished university in the United States, I went to work in Tokyo. However, one day, just at the time when lots of Japanese companies were setting up plants in Thailand, it occurred to me that the thermal insulation paint that my mother was manufacturing in Sakai might sell well in Thailand, so I decided to go over there to start up a business.

Thailand is hot all year round, so factories spend a fortune on running air conditioners. Because of this, they had applied thermal insulation paint to their roofs, but the air in Thailand is very polluted. Within six months, the snow-white paint had turned gray, reducing its reflectiveness. Seeing this, I hit upon the idea of an all-in-one photocatalytic paint that combined thermal insulation paint with a photocatalyst. I then began working on full-scale development with Osaka Prefecture University and Sakai City. Ultimately, we succeeded in developing an innovative photocatalytic paint.

Tell us about your plans for future development.

First and foremost, I want Optimus to be used in a variety of places. I want to increase the number of clean, pure-white buildings. I’d also like it to be used for interiors in places prone to odors, like I mentioned before, including not only nursing homes, but also kindergartens and trains. Next, my ambition is to move into international markets. Optimus isn't cheap, so I think we’ll need to focus on choosing specific cities to target. In that respect, I feel that we’ve got a good chance of success in New York, because people there are willing to spend money on interior décor.

My long-term vision is to make Optimus a global brand familiar to everyone. One of the places in my sights is the White House in the U.S.A. I want to create neighborhoods with snow-white buildings and fresh, clean air.