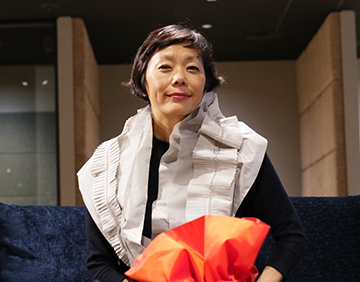 Business of "popupdress," a new concept in dress wear

Tell us about the products of Etudemains.

Tell us about the concept of popupdress.

The concept is "street dress."

The shapes of what are generally called "Western-style clothes" as represented by jackets have not changed for decades. In the current era, the fashion market is occupied by three major categories, i.e. "luxury," "fast fashion" and "sports," and other fashion categories are sluggish. Moreover, recently, OEM production is increasing, making every cloth similar. However, Etudemains is creating dresses based on the idea that cloth is a free item and people should be more liberated from the rules of dressing. 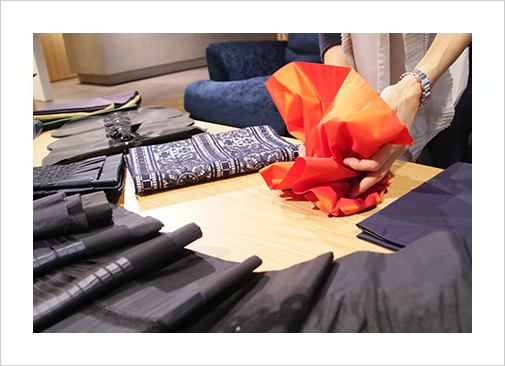 As I have already said, popupdress is a new-concept dress. It is a free "dress" which can be worn as a jacket, stole or of course as a dress.

In addition, popupdress is an item created by a layer of beautiful and high-quality handwork. It can be worn for a long time without worrying about trends and can also be used in any season. Moreover, wearing this kind of beautiful item provides an uplifting feeling.

You mean that people can change their feeling by wearing popupdress.

Not only feelings but also actions change. For example, people may prefer simple and high-quality clothes in addition to popupdress and look at clothes in a different manner. I hope I can change people's mindset to one wherein they think about what they need most through popupdress. Many customers have given feedback that they are invigorated by popupdress.

What provided you with the inspiration for popupdress?

Originally, I worked as a designer for a top fashion brand of Japan. Later, I was teaching design at a specialist school for a long period of time. When I was busy both in my business and social life, I was drawing designs, and suddenly, the idea and name of the popupdress occurred to me. Six months later, I put it into production.

Where can we purchase popupdress?

Now, popupdress is handled by department stores. Popupdress is an entirely new dress which cannot be found anywhere else. We are introducing how you can wear it with videos on our website, but please do feel the dress in your hands at a store and try it on.

Finally, tell us about the future developments.

I am also interested in delivering the dress by traveling as if meeting customers in retail service itself is an installation artwork. This is based on the idea that I would like to have customers actually pick up the dress, try it on and know their feedback and, actually, "traveling" is a subtopic of popupdress. Since popupdress can be folded into a small size, it can also be put in a pocket. The charm of popupdress is that it can be worn in various ways in a single day. For example, people can wear it to stay warm in cold weather or as a fashion item during the daytime and as a dress up item at night.

Popupdress also has the taste of a kimono. A kimono shows the creativity of the person who wears it. It is also created through much handwork by craftspeople with pride. Popupdress and kimonos also share the feature that they leave no waste pieces of cut cloth. We are expecting to deliver popupdress to the world as a new form of kimono of the 21st century..